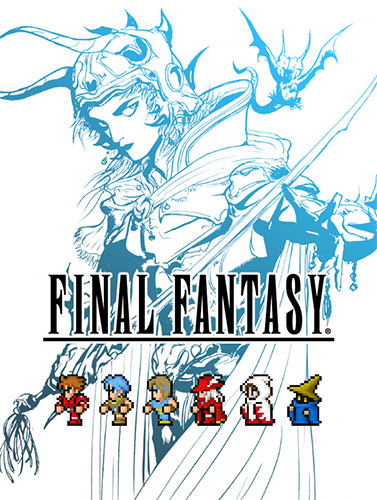 Final Fantasy
A remodeled 2D take on the first game in the world-renowned FINAL FANTASY series! Enjoy the timeless story told through charming retro graphics. All the magic of the original, with improved ease of play.

Earth, fire, water, wind… The light that once shone within the four Crystals was lost. Darkness covered the land, until the only hope for humanity rested in legends past. Become the Warriors of Light and embark on your own journey to restore power to the Crystals and save the world.

Switch between classes to improve your characters. Traverse the wide world with your airship and other vessels. Return to the game that started it all.

Final Fantasy II
A remodeled 2D take on the second game in the world-renowned FINAL FANTASY series! Enjoy the timeless story told through charming retro graphics. All the magic of the original, with improved ease of play.

Our epic tale begins with four young souls orphaned during the struggle between the Palamecian Empire and the rebel army. On their journey, the youths join forces with the white wizard Minwu, Prince Gordon of Kashuan, Leila the pirate, and many others. Behold the beautiful and sometimes tragic twists of fate that await you on your adventure.

FFII introduced a unique skill level system that strengthens different attributes of the characters depending on their fighting style instead of leveling up. Use the key terms you learn in conversation to unlock new information and progress in the story.

This innovative game series takes an ambitious turn in this second installment in the FINAL FANTASY series!

Final Fantasy III
A remodeled 2D take on the third game in the world-renowned FINAL FANTASY series! Enjoy the timeless story told through charming retro graphics. All the magic of the original, with improved ease of play.

With the power of light nearly eclipsed by the power of darkness, only the crystals’ four chosen adventurers can save the world.

Experience the iconic job changing system first introduced in FFIII – switch jobs at will and use various abilities as you progress in the game. Change into a variety of classes like Warrior, Monk, White Mage, Black Mage, Dragoon, Evoker, or even call monsters to do your bidding with as a Summoner.

Enjoy the exciting third installment in the FINAL FANTASY series!

This remastered series is based on the original “FINAL FANTASY” games released in 1980s-1990s. Features and/or content may differ from previously rereleased versions of the games.