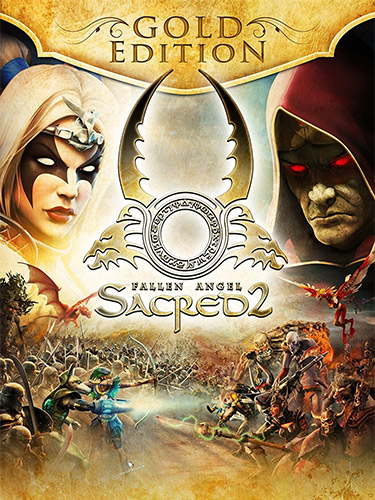 Experience the world of Ancaria in its full glory with Sacred 2: Gold Edition. Containing Sacred 2 Fallen Angel and the awesome add-on Ice and Blood. Defeat countless dangerous enemies; capture powerful weapons and valuable treasures. Prepare yourself for the ultimate battle and become a legend.

Sacred 2 Fallen Angel:
Poised on the brink of destruction and threatened by overwhelming chaos, a mysterious energy source is spreading across the world of Ancaria. Leaving mutation and terror in its wake, this living energy has become the razors edge on which all else is balanced. The powers of Light and Shadow are destined to collide in an ill fated battle that could tear apart the fabric of life itself.

Technically, this is not a mod, but an official add-on, but can be installed as a mod with JSGME. Don’t forget to enable the last quality setting in graphics option.

Back when original Sacred 2 Fallen Angel was released, a set of high-resolution textures was separately sold, dubbed “Elite Textures”. It added extra detail to many items, NPCs, monsters, landscapes, architecture and misc. objects in the game. It also added, sometimes unbearable, lags in crowded places, like cities.

The mechanics of said lags is as follows: when “Default” texture option is on, the RAM cache assigned to the game is 210MB by default, when “Elite” texture option is on the RAM cache assigned is 420MB maximum. Yet every large town contains enough units, using hi-res textures from the package, that actual RAM usage shoot up to 465MB. The game’s memory manager start returning it to the limit value, it overflows again, the memory manager optimizes it again, ad infinitum. All this causes constant heavy HDD I/O load, causing incessant lags.

An attempt has been made to remedy that situation – hi-res normal maps(the true reason behind the problem) have been selectively cut out. Judging by the feedback, the outcome was positive.

The Community Patch is the attempt of the Sacred fandom to correct as many bugs as possible that were left after Ascaron stopped development of Sacred 2. The mod also restores a large amount of unfinished/unimplemented content (enemies, items, quests, spell fx) and furthermore attempts to optimize the game code to allow for fewer crashes and freezes, and generally better performance.

The Patch has been ongoing for 10 years so the full change log is massive:

CP is a REQUIREMENT for Enhanced Edition v3.1, and must be enabled PRIOR the EE in JSGME.

Sacred 2 Enhanced Edition (S2EE) is the continuation of my work on older mods such as the Community Patch, of which S2EE is meant to be the successor. It is built on top of the Community Patch 1.60 so it requires that to be installed first.

S2EE contains hundreds of bugfixes, as well as numerous gameplay enhancements such as redesigned balance, quality-of-life improvements, and cosmetic changes. Enemies are more challenging, quests are more rewarding, and items are more varied, unique, and useful.

This mod also features AI-Upscaled Textures that will work if the Elite Textures are installed. These all-new HD textures will be used for the DLC and expansion content which never received any official elite textures.

The Purist Fixpack (PFP) is designed to be the most comprehensive bugfix patch for Sacred 2, as well as being the most strict project in terms of not making subjective changes or adding any fan-made content.

Unlike CP this one is tested only with English installation, support for other languages is not guaranteed.

Also, it CAN’T be used with CP and/or EE mods. But it will work with Elite Textures.