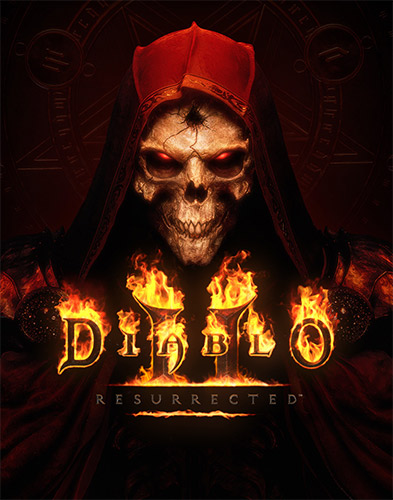 Game Description
Diablo® II: Resurrected™ is the definitive remastering of Diablo® II and its Lord of Destruction® expansion—two hallmark entries in Blizzard Entertainment’s genre-defining action role-playing series. Veteran players, as well as those who missed out when the original game was first released on PC twenty years ago, can now experience Diablo® II’s timeless gameplay with modern visuals and audio that take advantage of today’s gaming hardware.

Ascend the Forgotten Tower, blaze a trail through the jungles of Kurast, and storm the gates of Hell to defeat Diablo himself. Then, scale the peak of Mount Arreat to face Baal, the Lord of Destruction, in Worldstone Keep.

Seven of Sanctuary’s greatest champions await at the iconic campfire screen—the Amazon, Assassin, Barbarian, Druid, Necromancer, Paladin, and Sorceress. Each is highly customizable with countless build and gear options for players to explore.

Diablo® II: Resurrected can be played as a solo experience, or grab some friends on your preferred platform and enjoy multiplayer co-op. Then blow off some steam and claim a few ears by engaging in thrilling PvP duels outside of town.

If you have downloaded and still have some of my Ryujinx-powered repacks, you can use fg-ryujinx-firmware-12.0.3.bin from any of those and save 317 MB of traffic.

FAQ about this release

Q: Why not repack ZloEmu’s release, which is available for a few days already?
A: There are few reasons for that:

Q: Will you replace your Switch emulated repack with a PC one if a proper offline crack will be available?
A: Sure, and most probably, with my signature selective download option, unlike currently available solutions

Q: Does Switch version sucks compared to PC one?
A: Well, yes, but not the whole 10 inch.

Q: When I run the game in the emulator, it just hangs and sits on a black screen!
A: Known problem with a current build of the emulator. Just close the emulator console window, rerun it and try again. Sometimes it requires 2-5 or more attempts to get into game, but afterwards ir works OK.

Q: You said it works OK, but I see only bugged greenish screen and stuff!
A: Also a know current bug, videos are not playable atm, but you can easily skip them by pressing Z or X on your keyboard and get into the main menu

Q: What to do in there?
A: Create a new char, make sure you’re in offline mode. Also, when saving the char name, you should press Shift + “+”, which is a default mapping for Switch’s “+” button in Ryujix. At this stage you already might go into emulator settings and remap all keys to your liking

Q: Can I import my old saves from a classic Diablo II to this build?
A: Absolutely! Here are the instructions:

If you have saves from v1.14d, they are located here:

Let’s say, you had a char named Fartripper, then in this folder you’ll find these files:

For older v1.13c the saves are located in “%GAMEFOLDER%\save” and the amount of files is not the same as for v1.14d, but instructions for importing saves are the same.